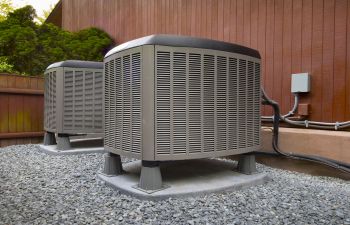 The past thirty years in the Heating and Ventilation (HVAC) industry have seen substantial improvements in the efficiency of heating and cooling systems. One of the basic components of this change has been the increased use of heat pumps and reduced dependency on fossil fuels. Most recently, Ductless Mini-Split-System Heat Pumps (Mini Splits) have become more common in new construction and when updating older structures. When discussing HVAC systems with a contractor, it’s easy to confuse the various components: heat pumps, air conditioning and furnaces.

What Is a Heat Pump?

The concept underlying all HVAC systems is to take heat from an undesirable location and put it into a more desirable location. One big thing to note is we’re talking about heat, not the air that can be blown around to spread it. In the summer, this makes sense because you want to take the heat out of your house and move it outside. Air conditioning units are a type of heat pump we’ve been using for years to achieve more temperate indoor areas.

When it’s freezing outside, where are we supposed to find heat to transfer? Even when it’s freezing according to the weatherman, there is still some relative heat to be collected. For example, if we compare heat units (Joules) to honeybees, in the summer there are plenty of both honeybees and Joules to be found. In the dead of winter, there are still honeybees and Joules around, we just need to look harder to find them. Thanks to HVAC innovations that have developed incredibly efficient equipment, we can collect the Joules and bring them inside, where we want them. As long as the temperature outside is above zero degrees Fahrenheit, there are enough Joules for a heat pump to collect.

Why A Mini Split?

Older homes which were built without ducting and new construction with an open floor plan may both benefit from a Mini Split. Installing ducting into pre-existing structures can be a costly endeavor. Instead, up to four indoor air-handling units may be connected to a single outside unit, each with its own remote-controlled thermostat. Also, each unit’s fan can be set to a variable speed so that instead of coming on full force, the fan gradually increases to meet the temperature need of the area it services.

Where Do Mini Splits Work Best?

Mini Splits are especially efficient in structures with larger open areas. They may be used in homes with several smaller rooms, but the cost of the different units may be prohibitive. Included in the system is the ability to dehumidify the air, which also aids in the heat transfer. If you’re interested in learning more about Mini Split systems contact ClimateSmith in Alpharetta to arrange your system efficiency analysis so we can improve your HVAC system.

Posted on behalf of ClimateSmith, LLC

We guarantee quality results and your full satisfaction on all of our jobs.
For further details about our HVAC services, simply give us a call or contact us.

Chris A.
I have recommended this company to everyone. They have a very professional staff, that are timely as well as respectful of your time and your home. Prices are very reasonable and the quality and service are amazing.

Robert B.
They came out right away and properly fixed my AC problem a month after the original AC company came out. Very professional and honest. They could have charged me double (which is what the original company did) and I would not have questioned it and would have gladly paid it. THANKS!

Keith S.
I generally don't post but will make an exception. ClimateSmith is the best HVAC contractor I've used in the 20+ years I've been in Atlanta. They installed a complete heat pump system and ductwork for a very challenging room to cool. Dependable, fair, honest, knowledgeable..highly recommended!

We accept the following forms of payment: